The basic principle of stick-slip inertia motion is the controlled use of friction in conjunction with the inertia of the moving part.

As shown in the drawing below, an oscillating piezo element is connected to a friction element that moves the sliding friction element forward when the piezo expands due to an applied voltage. When the piezo is fully extended, which is normally the case after an extension of about 1 μm, a rapid voltage change is applied that quickly pulls the piezo back to its original position.

The main problem with conventional stick-slip piezo motors is that the sliding friction element (moving part of the table) follows the backward movement to varying degrees during the slip phase. As a result, poor speed control, system vibration and motion loss occur. 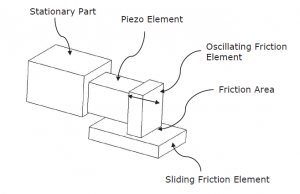 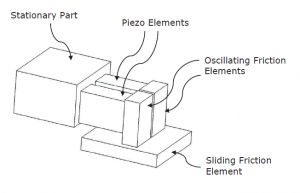 The graphic shows the significant improvement by using the Multi-Phase Stick-Slip piezo motor from MICRONIX. This motor reduces or eliminates the backward movement during the slip phase, as it is not only dependent on the inertia of the moving part. Instead, the MICRONIX piezo motor uses at least two piezos and two friction elements that move in common mode but slide at different times. At least one element remains in the embroidery phase while the other slips. This reduces or eliminates the retraction force and movement induced by the sliding force on the sliding element. The use of the multi-phase principle leads to considerable increases in performance compared to single-phase motors, including:

The MMC-100 is a powerful piezo motor controller. It enables speeds above 2 mm/s (MMC-110 to 5 mm/s) with our patent-pending multiphase piezo motor at resolutions of 1 nm. Multiple units can be stacked as a compact multi-axis module and connected to a computer via a single USB or RS-485 cable. The MICRONIX Motion Control Language allows easy programming through simple commands.